I have been the Fiction Editor of Unsettling Wonder: A Journal of Folk and Fairy Tales since its initiation in 2012, and its Editor in Chief since 2015. We aim to publish one beautiful volume a year, and are keen on discovering new voices. You can find out more at: http://www.unsettlingwonder.com/ 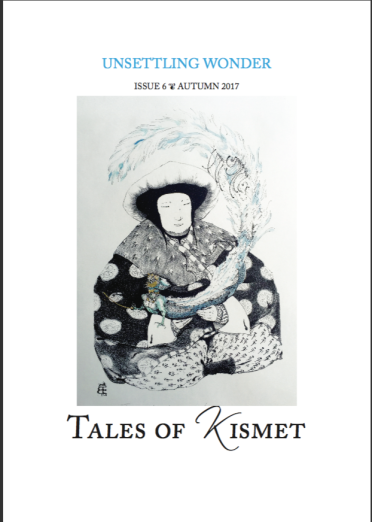 How can we tell if we desire anything? And, if we desire, is it our own self doing the desiring or something other—a flash of neurons, a memory of past life, the divine will. Karma. Predestination. Kismet. The oldest and darkest stories dare to ponder this question: Can we ever really know why anything happens in life?

This issue of Unsettling Wonder spins new stories to ask that old question, and challenges the ways we think we know the answer. Two djinn meet in a Glasgow bar to kvetch about the world’s fortunes. A Caribbean grandmother leads her family into the stewpot. Cinderella’s coachman recalls his life as a rat. A banshee strikes a devil’s bargain. Featuring work by Kirsty Logan, Jack Butler, Katherine Langrish, Ioulia Kolovou, and many others, Tales of Kismet is a beautiful, haunting collection on the caprices of fate.

Purchase at one of these sellers:
Amazon.com
Amazon.co.uk 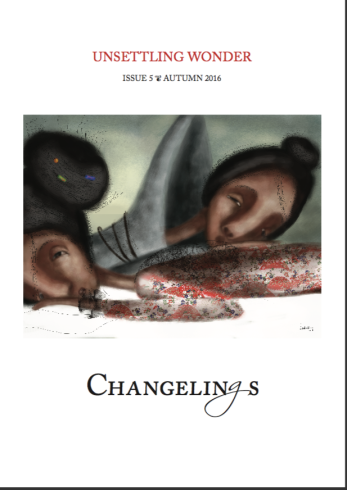 Anyone who’s cared for a child knows the sudden choke of fear, that sudden need to lean tense and breathless over the cradle to just listen—is the child still breathing? Is theirsmall heart still beating? Is this fragile, feeble young thing still safe in the night? Or have they—somehow—been changed? The oldest, darkest stories give a name to that fear—the instinctive, protective fear that someone, something, some shadow stalks by night to steal away the children: Lamia. Nian. Red Mother. Changeling.

This long-anticipated issue of Unsettling Wonder delves into the ancient folk motif of the changeling. Babies stolen from cradles, patients stolen from hospitals, objects stolen from kitchens, mothers stolen from families, and in their place something that looks the same but ever-so-slightly wrong. Has the familiar become strange, or has the strange become familiar?

Twelve newly commissioned stories, interviews, and artworks from around the world draw from diverse languages and folk traditions to articulate that haunting, night-terror idea: even the ones we love most might be changed.

Purchase at one of these sellers:
Amazon.com
Amazon.co.uk
Barnes & Noble

A little girl accidentally turns the sky to lemonade. A fragile witch tries to make a child out of wood. An armchair creaks with the magic of a thousand stories. And did you know Fibonacci designed a velodrome? Never mind rings and swords: here are unexpected objects cracking with magic of their own, full of laughter and fear and loneliness and just plain curiosity.

This issue is a celebration of the puzzling, tickling wonder of ordinary things, asking the bewildered question Why Would Anyone Enchant That? Surprising answers from Jane Yolen, Sierra July, Sharon Dodge, Katherine Langrish, Maureen Bowden, Benjamin Darnell, and Sarah Ann Winn, with photography by Thomas Brauer. Cover design by Laura Rae.

Purchase at one of these sellers:
Amazon.com
Amazon.co.uk
Barnes & Noble
The Book Depository

We craft and tell stories because we’ve stood on the uncertain edge between the waking world and our imagination, between enchantment and fear. And we remember other stories that help us build our own, scraps of lumber and fragments of narrative we gather together to make tales for ourselves. Unsettling Wonder is about going back to that place, that troubling, entrancing glimpse into story.

Purchase at one of these sellers:
Amazon.com
Amazon.co.uk
Barnes & Noble
The Book Depository

they, these women and men who wander through the old tales and take a mortal for a husband or a wife? Cranes and swans and seals who take the form of a woman, and become the mother of a man’s children for ever after, or seven years, or three days? What do they want, these strangers and wanderers, who pass by in the unsettled twilight, and leave behind wisdom, or fear, or love—and a bitter sorrow?

This issue of Unsettling Wonder is strange and angular, taking some unexpected turns along lesser-known paths of folk and fairy lore.

We’ve got a striking blend of old and new, with original fiction from Lisa Tuttle and A. L. Loveday, artwork by Fionnuala Cook and Eleanor Bennett, as well as classic folktales from Matthew Arnold and Lafcadio Hearn. The cover illustration was once again drawn by the marvellous Laura Rae.

Fairy Brides has sold out.

He tumbles round the Morris Dance and bounds through the Tarot. He finds true love in Anderson and falls in luck in Grimm. He’s a saint and a rabbi, an imam and a lama, a rich man, poor man, beggar man, thief. He’s Harlequin and Mr Punch, a wandering simpleton and good-hearted trickster. And now the wise fool finds himself in Unsettling Wonder.

Come and unravel foolishness and wisdom with us in the ancient canon of Nasreddin Hoca, the stories of Zoe McAuley, Patricia S. Bowne, Austin Hackney and Ken Altabef, the illustrations of Debbie Harris, Peter J. Herron, Laura Anderson, and the poetry of John Grey.

Wise Fools has sold out. 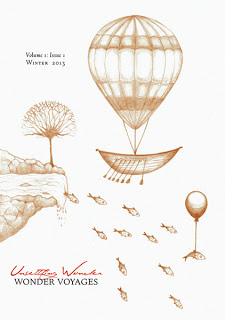 ime, a sense of immensity to daunt us and dwarf us, to point us towards an unknown place. A place where we are free to explore, to see something no one has seen before, to find sensations unknown, and, best of all, to witness things we cannot understand.

Our first issue explores the idea of voyage. Claire Massey begins with a voyage through place and memory, as ‘The Woman Who Wore Frost Slippers’ wanders on her own airborne peregrinatio. Jonny Wink’s poem ‘Great Grey Moles’ takes the traumas of the present day elsewhere. Patrick Weck shows us a glimpse of ‘The Voyage of Maelduin’ before Katherine Langrish guides us on a folkloric history of ‘Wonder Voyages’. We hear one of the old voyage tales then, taken from the variant of ‘Simon and Margaret’ collected by William Larminie. Finally, Jennifer Povey retells ‘The Voyage of the Fool’, in company with assorted inventors and derelict flying machines. We hope these tales guide you from island to island in goatskin boats.

Wonder Voyages has sold out.