[Published in the Glasgow Review of Books, images by Ömer Tevfik Erten] This is the street down which my grandmother remembers walking in red stilettos, under the shade of the poplar trees, and on cobblestones. They have since plucked out those trees and the cobblestones, and in their place they have splattered an absence of shade, and flat, hot tarmac on which shoes and wishes slide like pennies lost. This is the street where now the blind gather to sing their songs, and where women crouch to sell lavender from wicker baskets. It is also where I dress and undress the mannequins. 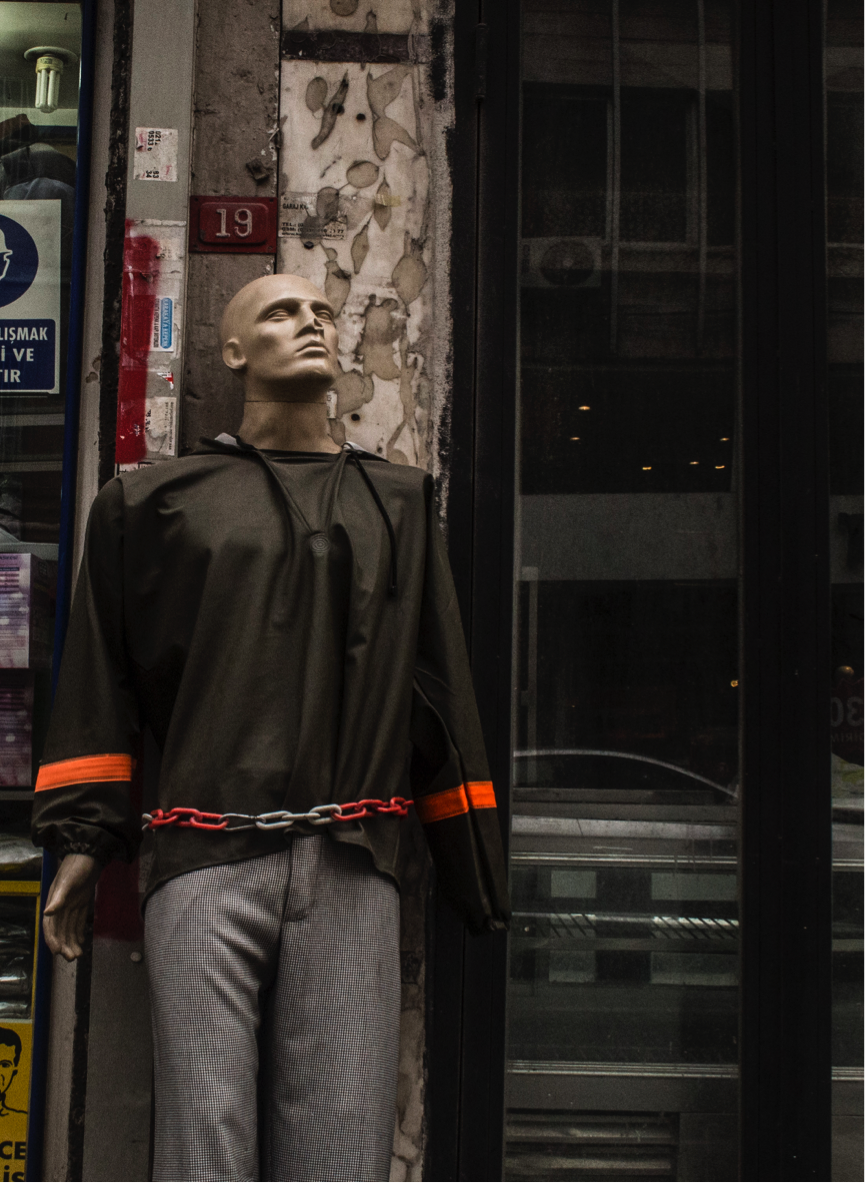 Dressing and undressing the mannequins is not a job just anyone would want to do. I am not employed by a shop, but by the street itself. I start at the very top of it, at shop number 2, and by noon I have arrived at Galatasaray High School and shop number 58. By afternoon coffee, my work is complete and the mannequins look the better for it. At least that was my life until the sun-lit Sunday when my grandmother, who was once in red, hot stilettos, told me that she had a need for scarecrows. Her garden had been infested; the green of her grass was covered with the black wings of birds. I considered our options, meaning, I considered becoming a scarecrow. I could stay still under the burning sun and the lashing rain. I could watch out for the birds on the horizon, coming towards me, flapping their wings in hunger, their beady eyes reflecting my own. I could wait and be very, very still, but I knew I could not sleep standing upright. The evenings would be cold; I would gather dew.

Then it occurred to me: the shops had an abundance of mannequins. With their high cheekbones, their half man, half woman eyes, their flawless skin, lustful gaze; they excited the buyers all the time. They even aroused me, and I handled them every day. Their arms, hands, feet kept falling off, but those mannequins, they never minded. At times they smiled for so long that I was convinced of their hurt. It was their interest I had at heart when I placed them in the van. They would prefer the wild to the tame. Rather the rain and the dew than my tired hands. Rather the wings of crows than the longing of strangers. Rather my grandmother’s garden than the city. A few days later, just as the mannequins and I were getting used to the soil beneath our feet, a bomb exploded on the street where I worked, and where my grandmother used to walk in her red stilettos, under the poplar trees and on the cobblestones. Other bombs had exploded before and other bombs would explode later but this bomb had hit my street, and had there been no infestation of crows, I would have been at shop number 42 by the time it went off, undoing a button perhaps, or tying a knot. There would have been no life left inside of me.

What can I tell you? I do not believe in the stability of places. No longer sure about time. My birthplace, for instance, was a village atop a mountain in the South East. Facing the sun. It is now burnt down. They removed my father’s tombstone from his grave. When I came to the city, the rooms I inhabited often felt like construction sites. I think I was born in the month of May but cannot really be sure. My mother remembers eating cherries, and that means the time may have been June. I always felt incomplete, considering I did not take revenge from those who disturbed my father’s grave, considering I fled our ancestral mountains like a rabid dog, considering I did not have a birthday or a horoscope. My incendiary planets having fallen by the wayside, alongside the possibility of an unerring soulmate to confide in.

The mannequins, grandmother and myself: we trusted each other. We opened the house and the garden to those who escaped the bombs and the city. An old Syrian left behind by the fleeing Syrians entered; the man who sold lottery tickets and still insisted on the kindness of fortune entered; the stray cats and their kittens entered our garden. The open gates reminded me of the time I had unlocked my flat in the summer of Gezi, the time when everyone had either a gas mask or camera in hand. There was hope in open gates then, now only a tint of despair in their corroded iron. The mannequins, the homeless, the cats, grandmother and I, we hugged, and slept under the lights of the city which blinked like only the stars that are long dead can. We collected dew.

Three days after the bombs, I drank a cup of bitter Turkish coffee in the garden of the scarecrows and I fell into a dream momentarily. There was me, and the two mannequins. Instead of arms they had wings. We were seated in a caique. All around us it was night. I knew that one mannequin could not see, and that the other mannequin could not hear. I myself had no tongue, but a candle in my palm. Its light flickered. I saw that we were on a stream of water. I felt that there was a southward current.

And even though I had only ever known the flattened hot tarmac streets where pennies and wishes slide only to get lost, the coolness of the water felt familiar on my skin. And even though we had residual fear weighing heavy on our shoulders, we were also a little happy. The current would take us elsewhere, maybe. Maybe, we would look at the city from afar. Maybe, I could finally form new words in my restless, relentless, tongueless mouth.

But the dream I fell into lasted only a split second. There is no southward current, there is no water, there is no caique. There may be nothing else outside this city. And so we sit in our garden and await the inevitable, the way of fearful scarecrows.